I knew today was going to be a good day.  Yesterday evening we go down to the Shearing Shed, opening gates and setting up the pens.  Then we head over to one of the ewe mobs and gather them up and take them back to the shed.

We all know the routine and the sheep and I arrive back at the yards quite a way ahead of The Boss who follows behind closing gates.  I hold the ewes in the yards until The Boss catches up.  Sometimes we do stuff with sheep in the yards first, but they always spend a couple of hours in the yards before they go into the shed for the night.  I’m not sure why.

Just before dark we head back down the yards and run the ewes up into the shed.  I Go Out and watch while The Boss spreads them evenly in the pens, letting a few out or a few in.  Even the ewes have figured out by now that tomorrow we’ll be shearing.

On shearing days we don’t go for our usual walk before breakfast, we take stuff down to the shed and check that all is well with the ewes.  Breakfast is shorter and earlier than usual and we are back down the shed when The Shearer arrives.

I like The Shearer.  He always remembers my name and gives me a pat when I go and say hello to him.  I can smell at least seven or eight different dogs on him and his ute; The Shearer likes dogs.  Sometimes he brings one with him.  Once, on a hot day, it came into the shed with us for a while, but usually its just me, The Boss and The Shearer.

We all have our jobs, The Shearer dragging the sheep out of the catching pen and wrestling their coats off, The Boss picking up the fleece, throwing it on the table and playing with it for a while, then rolling it up and stacking it in one of the bins, sweeping up the dags for me to sort through later (what a treat!) and opening the gate for me to push more sheep into the catching pen.

The ewes don’t like having their coats taken off and don’t want to go into the catching pen.  I have to work hard pushing them in, barking if I have to, to get them moving.  Sometimes one turns around and stands and wants to fight.  These ones might get a nip.  You have to show them who’s boss! 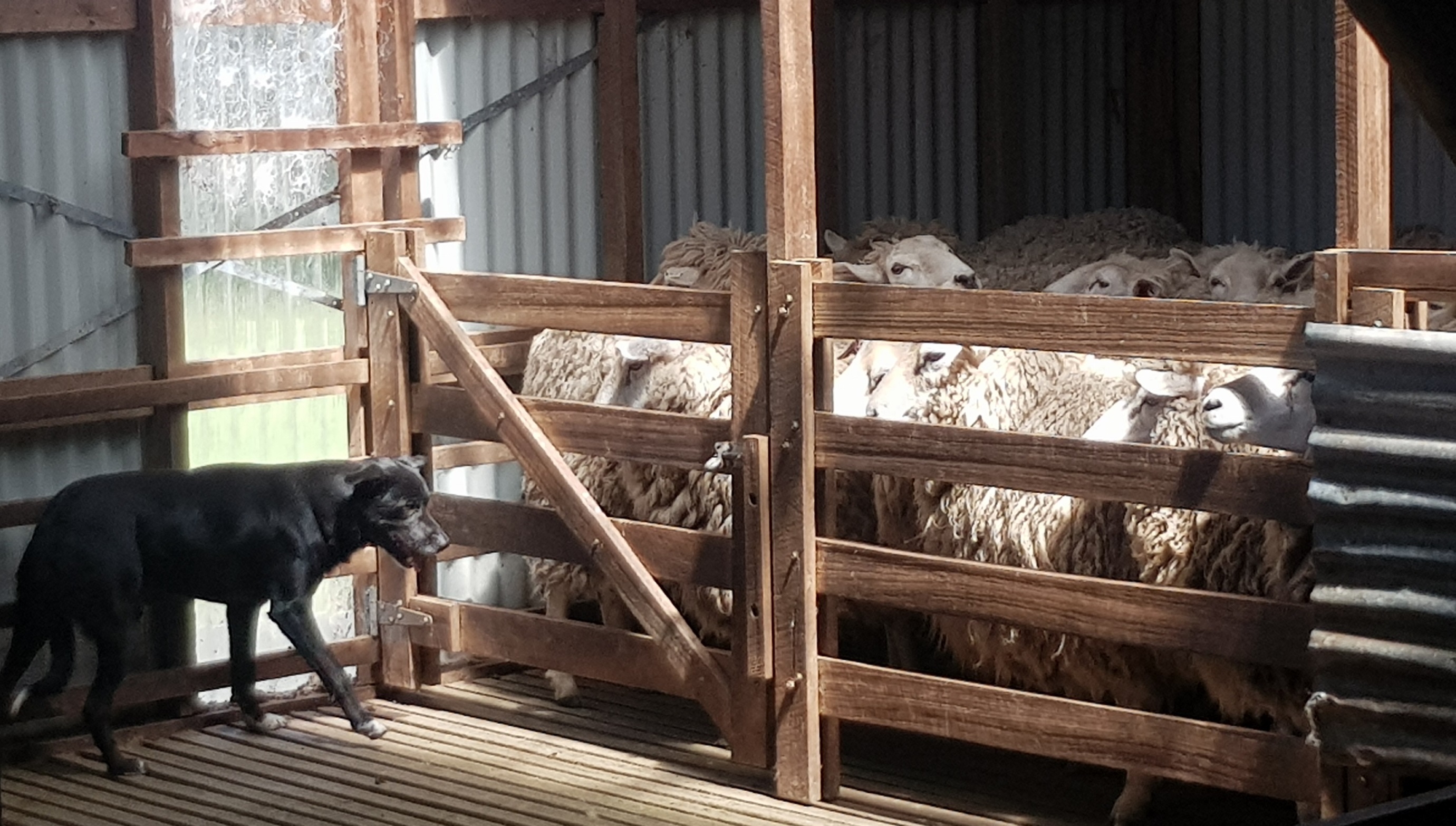 When I’m not pushing them into the catching pen, I patrol the side of the forcing pen, keeping an eye on any ewes with the wrong attitude and letting them know they will have me to deal with if they jump out.  The Boss and The Shearer talk most of the morning till smoko, then till lunch.  The run after lunch is a bit quieter, The Shearer has his music going (its different to The Boss’s music) and I sometimes have a snooze between pushing up sheep.  They have been in the shed all night and most of the day now, and the fight has gone out of them a bit.  The last is run is a bit more lively, The Boss and The Shearer are chatting again, the ewes that are left in the shed seem to know that they will be out soon having a feed and a drink.

The Shearer flicks off the machine when he’s wrestled the last ewe in the pen and starts packing up.  The Boss and I still have work to do.  We go out into the yards and gather up all the shorn ewes and run them up to the race.  Looks like we are going to drench them.  The Boss opens the gate, I push sheep into the race, The Boss closes the gate and squirts some potion in their mouths then lets them out so I can push more in.

When they are all done we take them over the back to a fresh paddock.  I notice we have been leaving the gates open leading to the Shearing Shed.  Sure enough, on the way back we gather up another mob of ewes and take them to the shed.  The ewes and I arrive back at the yards quite a way ahead of The Boss and I hold them until he catches up.

Looks like tomorrow is going to be another good day.  I love shearing.